A Government Shutdown This Holiday Season is a Very Expensive Mistake 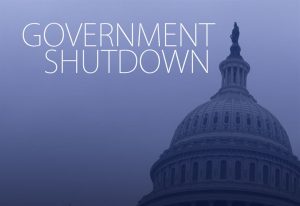 As we approach Christmas 2018, President Trump has promised to shut down the government unless Congress authorizes money for a border wall. This is the second time this year we have written a blog post about the looming threat of a government shutdown. This is a cruel, expensive, and totally unnecessary message for our nation’s leaders to send to federal employees.

As with the 2013 shutdown, if the government shuts down it will require its “essential” personnel to keep working, but they will likely not be paid until after the shutdown is over, whenever that might be. This means that the government will require the very people we rely on for essential safety functions, including securing prisons, fighting wildfires, operating airport security checkpoints, and, yes, securing the border, to work without pay during the holiday season when families often need their paychecks the most. It is outrageous that employees who work for us – some risking their lives in the process — should also have to worry about whether they will get paid for the work they do, or have to forego medical treatment, miss a rent payment, or be unable to buy gifts for their family over the holidays.

As a society, we found this behavior so unacceptable that in 1938, Congress passed the Fair Labor Standards Act (“FLSA”) to protect workers. Assuming the government takes no measure to ensure its employees are timely paid, it will be engaging in a willful violation of the FLSA, which requires employers, including the government, to pay FLSA non-exempt employees at least minimum wage on the correct payday. It is a fundamental breach of responsibility for the government to careen towards a shutdown while violating both the law and the absolute principle that people should be paid timely for their work.

Following the 2013 shutdown, KCNF partner Heidi Burakiewicz sued the government on behalf of approximately 25,000 federal employees who were required to work during the shutdown but were not paid on their regularly scheduled payday in October 2013. In July 2014, the U.S. Court of Federal Claims ruled that the government violated the FLSA when it failed to pay essential employees on their regularly scheduled payday, and in February 2017, the Court ruled that the government was liable for liquidated damages to essential employees because it did not act in good faith.

While the government is still calculating the damages it owes its employees from the 2013 shutdown, it seems determined to repeat its mistake and invite another expensive lawsuit to which it will have little defense. KCNF is dedicated to protecting employee rights and stands ready to file another lawsuit if the government insists on violating the law and exploiting its workers.

This blog is provided to our readers for informational purposes only. It is not offered as legal advice. Communication of information through this blog does not create an attorney-client relationship. You should not rely upon information contained in this blog without first seeking professional legal advice. Attorneys at KCNF practice wage and hour law and have recovered tens of millions of dollars in unpaid work on behalf of employees. If you would like a telephone screening or consultation with a KCNF attorney, you are welcome to call 202-331-9260 to begin our intake process, or submit your legal issue at kcnfdc.com/Contact.