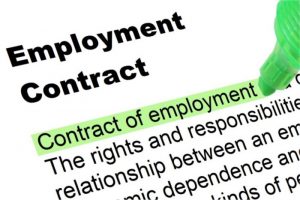 Issues in employment agreements affect both current and future employee rights. Previously, we looked at the growing trend by employers to use language restricting potential claims by inserting a provision into Maryland employment agreements shortening the statute of limitations. Employees also must be aware of the perils which could eliminate the receipt of expected post-employment compensation.

Recently, in Brian Blood v. Columbus US, Inc., the Maryland Court of Special Appeals ruled that an employee’s right to receive payment from a non-compete clause was not a “wage” and could not be considered compensation for work performed prior to termination under Maryland’s Wage Payment and Collection Act (“Wage Payment Act”). The decision suggests that these kinds of agreements be drafted with care.

This dispute arose between Blood and his former employer, Columbus. On January 4, 2004, the parties entered into a Vice President Contract which contained the following provisions:

10.4 In exchange for clause 10.1 excluding 10.1a limitation (ref. Appendix 2), the
Company shall pay remunerations equal to 100% of the VP’s fixed salary, as stated in
Appendix 2, upon the Company’s termination of the [VP’s] Contract. The remuneration
shall be paid in equal monthly installments over the period in which the non-competition
clause applies.

10.4a In exchange for clause 10.1 incl. 10.1a (ref. Appendix 2), the Company shall pay
remunerations equal to 50% of the VP’s fixed salary, as stated in Appendix 2, upon the
Company’s termination of the [VP’s] contract. The remuneration shall be paid in equal
monthly installments over the period in which the non-competition clause applies.

Blood resigned from his position on December 1, 2015, thereafter asserting a lien claim for unpaid wages. The Maryland Lien for Unpaid Wages does not define the term “wage.” Consequently, the Court of Special Appeals used Maryland’s Wage Payment Act and its definition of “wage” as guidance, as well as caselaw holding that a right to compensation vests only when an employee “ha[s] performed all the work necessary to earn the [compensation] before termination.” Medex v. McCabe, 372 Md. 28, 37 (2002) (“it is the exchange of remuneration for the employee’s work that is crucial to the determination” of whether the compensation is a “wage”). Only if Blood’s remuneration was in “exchange” for work performed before termination, or as a result of employment, would it would fall within the scope of the Wage Payment Act.

Analyzing this case in light of prior holdings (Aronson & Co. v. Fetridge, 181 Md. App. 650 (2008) and Stevenson v. Branch Banking and Trust Corp., 159 Md. App. 620 (2004)), the issue focused on the “[i]n exchange for” contractual language. The Court of Special Appeals ruled that the Vice President Contract was a disqualifying quid pro quo agreement and that the unmade payments were not compensation that vested during Blood’s employment, but rather, vested and accrued after employment. Of further importance was the lack of a deferred compensation account created contemporaneously with the promise not to compete (i.e.: during employment) that existed in Aronson and which was determined annually in that case during employment.

The Blood decision offers another reason for an employee to carefully review and understand an employment agreement. To be safe, post-employment remuneration should be structured such that the payment is in “exchange” for work performed before termination or as a result of employment. Payment on a quid pro quo basis with a non-compete provision must be avoided.

Often, a decision to retire or change jobs is made with the financial expectation of continued “wages.” Don’t find out too late that your expectation is wrong.