Fathers Need More Than A Day 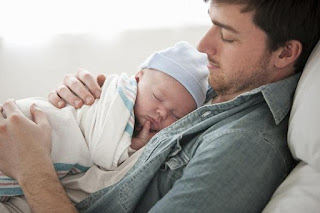 In the wake of Father’s Day, it seems apt to reflect on the state of paid paternity leave in the United States and the resounding negative effects that result from having piecemeal policies—where policy exists at all.

It is the Equal Employment Opportunity Commission’s positionthat leave related to pregnancy, childbirth, and/or related medical conditions can be limited to women affected by those conditions.  “However, parental leave must be provided to similarly situated men and women on the same terms.”  Id.  For example, if an employer extends leave to new mothers beyond providing medical leave for women with pregnancy-related conditions (e.g. to provide mothers with time to bond with and/or care for their newborns), the employer cannot lawfully fail to provide an equivalent amount of leave to new fathers for the same purpose.  Id.  “Although Title VII does not require an employer to provide pregnancy-related or child care leave if it provides no leave for other temporary illness or family obligations,” the Family and Medical Leave Act (FMLA) requires covered employers to provide such leave.  Id.
Under federal law—through the FMLA—fathers have access to 12 weeks of unpaid leave.  Because of restrictions, however, (e.g., businesses that have fewer than 50 employees are exempt from the rule), not all working fathers are eligible.  Moreover, many parents cannot afford to take unpaid time off work.1
“[A]t least 66 countries guarantee a father’s right to paid paternity leave – 31 offer 14 weeks or more.”  Id.  The U.S. is the only industrialized nation that does not require any paid time off for new parents.  Moreover, the policies that do exist “are all over the place.”2 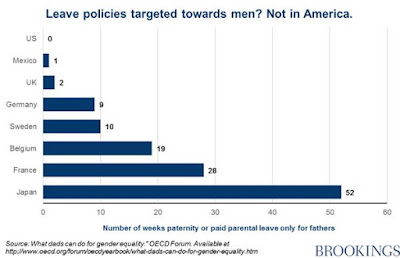 In the past year, there has been an unprecedented rate of expansion in the number of employers either introducing or expanding paid leave options for new fathers:
Paid time off for fathers, however, is not commonplace.  Fewer than 20% of U.S. employers offer paid paternity leave.  Id.  In an online poll of 1,000 employed adults across the U.S. with access to employer benefits:  more than 1/3 thought taking leave would “jeopardize their position” at work; more than 1/2 thought spending time with their newborn would be perceived as a lack of commitment; and 41% feared losing opportunities on assignments at work.
Family leave has often been framed as a “women’s issue”, an assumption that fuels workplace discrimination against both genders:  “Mothers are seen as caretakers who prioritize home life, and fathers who take more than a week or two off are perceived as less serious about their careers.”   In fact, economists attribute the gender wage gap and lack of women in top leadership positions in part to this parenting imbalance:  fatherhood is associated with a 6% wage bonus, while motherhood carries a 4% wage penalty.  Id.
This perception, however, may start to change as more employers begin offering paid paternity leave, “in large part because companies are in an arms race with competitors to attract Millennials and keep their best talent on board.”  For example, one of the most publicized expansions of paid paternity leave came at Facebook, which now allows men and women to take four months of paid parental leave following the birth of a baby (up from 4 weeks previously). Notably, Facebook CEO Mark Zuckerberg announced on Facebook that he would be taking two months of paternity leave when his daughter was born—noting that “[s]tudies show that when working parents take time to be with their newborns, outcomes are better for the children and families.”
Additionally, men might have less to worry about than they think.  Research has found that having a child improves men’s careers, their earnings increasing by more than 6% for each child they have.  While part of that narrative stems from fathers being seen as responsible (while moms are viewed as distracted), it also results from fathers not taking time off to have kids.
Despite the numerous potential benefits of paternity leave3, the Department of Labor reports that “70 percent of men taking leave for parental reasons took 10 days or less.”   A 2012 Department of Labor study found that fewer employers offer paid parental leave for men than women:  Only 13% of men who took parental leave received pay compared with 21% of women.  Id.  Only California, New Jersey, Rhode Island, and New York4 provide paid family leave to both parents on an equal basis.5  Id.  Encouragingly, “[t]here are ongoing efforts to do the same at the federal level and in at least 15 other states.”
“California’s paid family leave program shows how broad and equal access to paid parental leave for mothers and fathers can substantially increase the number of fathers taking leave.  This program more than doubled the odds that men would take parental leave after the birth of a child, and the proportion of men filing claims for bonding leave increased from 17% in the first year to 26% after five years.”
Although “parental leave policies are designed to level the playing field between parents, they only work as intended if men take advantage of the time they’re given to devote to childcare.”  Cognizant of the fact that having access to paid paternity leave is not the same as taking it, “[s]ome European countries and the Canadian providence of Quebec have begun offering up to several months of paid parental leave specifically designated for fathers, instead of providing couples with shared parental leave to divide as they choose.”  Fathers with access to specifically-designated paid parental leave take paternity leave at higher rates than those where leave is discretionary for either parents—especially when that leave also has higher levels of income replacement.
Beyond the problems with the U.S. not requiring paid leave for new parents, the notionthat a child has one parent who is a primary caregiver and another who is secondary is “startlingly outdated.”   About 60 percent of families with children at home have two working parents who share caregiving responsibilities.  Workplaces should be doing what they can to encourage an even distribution of those responsibilities, not encoding the idea that one parent will do more.”  Id.  Tellingly, 78% of Millennials are part of a dual-career couple (compared to 47% of Baby Boomers).  “Unless and until men and women share the responsibilities of parenting equally, gender parity in the labor market will remain out of reach.”
Ensuring that both parents are provided some form of paid paternity leave is something that needs to be stressed as a culture.  Certainly, fathers—and the families that they share in raising—need more than a day.
[1] “Nearly half of workers surveyed in 2012 who needed leave but didn’t take it reported not taking leave for economic reasons.  More than three in ten individuals who received partial or no pay reported cutting their leave short of what was needed, and more than four in ten would have taken longer leaves if they had received more pay.”  Dep’t of Labor, DOL Policy Brief:  Paternity Leave, Why Parental Leave For Fathers Is So Important For Working Families, June 18, 2015, at 3.

[2] Employers vary in the amount of time offered.  “But even within a company, a policy may not apply equally to all fathers at a firm.  Sometimes hourly employees aren’t included or their benefits are less generous than those of salaried workers.”  Jeanne Sahadi, Reinventing Work:  Dads get more of a (paid) break at work, CNN Money, June 17, 2016.

[3] A more equal division of labor in terms of parenting and childcare; more equal sharing of domestic labor, including housework; less stress on the family; closer father-infant bonding—leading to better developmental outcomes for their children (including fewer behavioral problems and improved cognitive and mental health outcomes), id. at 2; and higher pay for mothers (according to a Swedish study, future income for new mothers rises by 7% on average for every month of paternity leave taken by the father).  Richard V. Reeves, Give fathers more than one day:  The case for paternity leave, Brookings, June 17, 2016.

[5] “California covers 55 percent of an employee’s wages for up to six weeks; New Jersey, up to about 67% for six weeks; Rhode Island covers a portion of wages for up to four weeks, based on the employee’s income.  Each state’s program is funded through an employee payroll deduction, and payouts are capped.”  Id.  Although Washington State passed a paid-parental-leave law 10 years ago, it has not gone into effect due to lack of funding.  Id.