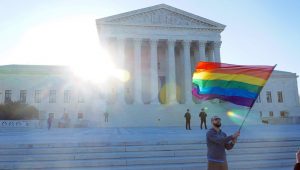 As a case of religious discrimination, the Supreme Court’s recent opinion in Masterpiece Cakeshop, Ltd. v. Colorado Civil Rights Commission shows remarkable breadth in the range of evidence that can be used to prove bias and unlawful discrimination. Moreover, the Court’s majority has made clear that governments have the power to prohibit discrimination against the LGBTQ community, so long as they enforce their laws without betraying an unlawful “hostility” toward religion.
In 2012, before the Supreme Court’s 2015 Obergefell decision recognized the right to same-sex marriage, Charlie Craig and Dave Mullins (with Craig’s mother) visited the Masterpiece Cakeshop near Denver, Colorado, to order a wedding cake. They did not request any particular design or text for the cake. Nevertheless, Jack Phillips, the proprietor, announced that he would not make a cake for a same-sex wedding. He offered to make cakes for other occasions for them, but not for same-sex weddings. Craig’s mother called back the next day, and Phillips explained that he had a religious objection to same-sex weddings.

Craig and Mullins filed a complaint with the Colorado Civil Rights Division alleging that Masterpiece Cakeshop denied them “full and equal service” on account of their sexual orientation. Indeed, the investigation confirmed that this cakeshop had turned away other potential customers because of their sexual orientation. The Division found probable cause supporting Craig and Mullins’ complaint and referred the case to the Colorado Civil Rights Commission for a hearing.

A Colorado Administrative Law Judge (ALJ) rejected Phillips’ claim that the anti-discrimination law violated his First Amendment right to exercise his religion. The ALJ relied on the 1990 Supreme Court decision in Employment Div., Dept. of Human Resources of Ore. v. Smith, in which the Court held that Oregon could deny unemployment benefits to those fired for using peyote during religious ceremonies. This is because, according to the Court, “the Free Exercise Clause ‘does not relieve an individual of the obligation to comply with a valid and neutral law of general applicability[.]’” The ALJ also held that making a cake is not a protected form of Free Speech.

During the appeal to the full Commission, one Commissioner stated that people and companies doing business in Colorado needed “to look at being able to compromise.” Another said, “religion has been used to justify all kinds of discrimination throughout history” and made reference to slavery and the holocaust. “And to me it is one of the most despicable pieces of rhetoric … to use their religion to hurt others.” The Commission affirmed the ALJ’s order and required Masterpiece Cakeshop to cease and desist from discrimination, provide staff training on non-discrimination laws, and to make quarterly compliance reports for two years. Colorado’s law does not authorize the Commission to award monetary damages or fines. A state appeals court affirmed the order, and the state Supreme Court declined to hear it.

Speaking for seven Justices, Justice Kennedy (the author of the Obergefell decision) began by saying, “Our society has come to the recognition that gay persons and gay couples cannot be treated as social outcasts or as inferior in dignity and worth.” He made clear that “religious and philosophical objections are protected,” but, “it is a general rule that such objections do not allow business owners and other actors in the economy and in society to deny protected persons equal access to goods and services under a neutral and generally applicable public accommodations law.” Citing Newman v. Piggy Park Enterprises, Inc. (1968), the Court emphasized that the same doctrine that protects African-Americans from being denied motel rooms still applies today to protect the right of gay Americans to buy wedding cakes. Indeed, governments legally can protect any group that “is the target of discrimination.”

In this case, however, the Supreme Court’s decision, turned on the notion of “neutrality”: “Phillips was entitled to neutral and respectful consideration of his claims in all the circumstances of the case.” The Supreme Court would not accept even a “subtle” departure from neutrality. Because the Commission’s treatment “has some elements of a clear and impermissible hostility toward [Phillips’] sincere religious beliefs,” its order had to be set aside. Justice Kennedy’s opinion notes the Commissioners’ argument that religious beliefs cannot legitimately be carried into the public sphere. The First Amendment’s Free Exercise Clause says the opposite.

Justice Kennedy acknowledged that the statements that business people cannot act on their religious beliefs, or must “compromise” them, may be “susceptible of different interpretations.” That the Court nevertheless rejected the Commission’s decision on this basis is a significant expansion of the types of statements that can be used as direct evidence of bias. If bias can be one of a number of different interpretations of a decision-maker’s statement, then claimants can use them to support a claim of unlawful motive.

In conjunction with the statements about slavery and the holocaust, though, Justice Kennedy found that the statements more likely expressed a lack of due consideration for Phillips’ free exercise rights. Justice Kennedy underscored how the Commission failed to disavow the comments in the subsequent litigation all the way to the Supreme Court. “[T]hese statements cast doubt on the fairness and impartiality of the Commission’s adjudication of Phillips’ case” – that is all the Supreme Court required to find an unlawful motive and set aside the order.

Justice Ginsberg disagreed that comments by the Commissioners should invalidate the order that was otherwise valid. She notes that the comments came from only two of the seven commissioners, and the decision was affirmed by the Court of Appeals which made no comments disparaging of religion. However, the Supreme Court had held in Staub v. Proctor Hospital (2011) that the unlawful animus of one participant in a decision can cause that decision to be unlawful. Ginsberg did not mention Staub in her dissent. Claimants facing a company defense that the final decision was made independently by a higher authority with no animus can now point to this Masterpiece decision to show how the Supreme Court has rejected this defense.

At the Supreme Court, even Phillips’ attorney had to agree that if Phillips refused to sell any goods for a gay wedding, then the State would have a strong argument that Phillips had violated the law. However, this same lawyer pointed to three other cases decided by the same Commission. These cases arose from a Phillips sympathizer, William Jack, who went to three presumably liberal bakeries and asked them to prepare cakes with two specific designs disapproving of homosexuality. All three refused and Jack filed complaints against all three. In all three cases, the Commission found no violation of the law. Recall that Phillips refused to provide a wedding cake for Craig and Mullins before they could specify any design at all.

Pointing to others who were treated differently – called “comparators – can be evidence of discrimination unless the difference can be otherwise explained. Although comparator evidence is not always available, and is never required, discrimination cases can often be proven by showing that an employer treats some people differently than others. In many instances, comparator evidence is challenged on the ground the plaintiff and the comparator are not similarly, or identically, situated. Here, the majority opinion found that the Commission’s treatment of the Jack complaints “could reasonably be interpreted as being inconsistent as to the question of whether speech is involved, quite apart from whether the cases should ultimately be distinguished.”

This holding is remarkable in two respects. First, it holds that even if a comparator can be distinguished, it can still be used as a comparator to find an unlawful motive. Way too many courts have held that comparators have to be “substantially similar” and will use all manner of differences to deny claimants their evidence of disparate treatment. While in the 2007 Sprint/United Mgmt. Co. v. Mendelsohn case, the Supreme Court made clear that it is for the jury to decide if cases are fair comparators, in Masterpiece, the Supreme Court opened the door to evidence of unlawful motive even if the cases are distinguishable. The Court majority used the Jack cases as comparators even though (as Justice Kagan noted) the liberal bakers did not break the law at all – the cakes Jack sought were cakes they would not sell to anyone, and Jack could have bought (as the gay couple in Masterpiece tried to do) the same cakes available to everyone else.

Second, without mention, the Supreme Court makes clear that events arising after the adverse action at issue are still sources of relevant evidence of motive. While numerous appellate cases have said that subsequent events can be relevant, and no per se rules should prevent discovery of relevant evidence, it is nice to have the Supreme Court use this type of evidence to make a case of unlawful discrimination. Justices Thomas and Ginsberg even cited to the Masterpiece web page as it existed three days before they issued their decision (Thomas to show Phillips’ “exceptional care” and Ginsberg to show that his wedding cakes do not have any words at all).

Justice Gorsuch took pride in how “we protect religious beliefs we find offensive.” Yet, this Court went to new lengths to make a finding of anti-religious discrimination to free Phillips from Colorado’s order. Time will tell if the Supreme Court, and other courts, will use these same methods to make findings of unlawful discrimination in other cases. If they do not, we will have good comparator evidence that Masterpiece Cakeshop received special treatment.