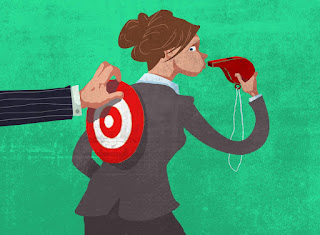 On March 8, 2017, a three-judge panel of the Court of Appeals for the Ninth Circuit ruled in favor of Paul Somers, a former Vice President of Digital Realty Trust. Mr. Somers was fired after disclosing what he viewed to be several serious securities law violations. What distinguished Mr. Somers from many of his fellow Dodd-Frank whistleblowers—and indeed, what could make this an issue for the Supremes—was that Digital Realty Trust fired him before he had the opportunity to transmit this information to the Securities and Exchange Commission (SEC), which is tasked under Dodd-Frank to investigate and prosecute such violations. This, Digital Realty Trust attempted to argue, precluded Mr. Somers from the whistleblower retaliation provisions under Section 21F of the Exchange Act, entitled “Securities Whistleblower Incentives and Protection.”

The Ninth Circuit disagreed. It ruled that Dodd-Frank’s anti-retaliation provision “unambiguously” protected employees who made only internal disclosures. The two-judge majority referred to the legislative history of the Sarbanes-Oxley Act, a law Congress enacted in the aftermath of the 2002 Enron collapse to safeguard investors and to restore public confidence in financial markets. Sarbanes-Oxley, or SOX, plays a key role in Section 21F of the Exchange Act, which states:

No employer may discharge, demote, suspend, threaten, harass, directly or indirectly, or in any other manner discriminate against, a whistleblower in the terms and conditions of employment because of any lawful act done by the whistleblower—

(i) in providing information to the Commission in accordance with this section;

(ii) in initiating, testifying in, or assisting in any investigation or judicial or

administrative action of the Commission based upon or related to such information; or

(iii) in making disclosures that are required or protected under the Sarbanes-Oxley Act of 2002 (15 U.S.C. 7201 et seq.), this chapter, including section 78j-1(m) of this title, section 1513(e) of Title 18, and any other law, rule, or regulation subject to the jurisdiction of the Commission.

Finally, our interpretation best comports with our overall goals in implementing the whistleblower program. Specifically, by providing employment retaliation protections for individuals who report internally first to a supervisor, compliance official, or other person working for the company that has authority to investigate, discover, or terminate misconduct, our interpretive rule avoids a two-tiered structure of employment retaliation protection that might discourage some individuals from first reporting internally in appropriate circumstances and, thus, jeopardize the investor-protection and law-enforcement benefits that can result from internal reporting.

The Ninth Circuit’s interpretation deepens the pre-existing circuit split between the Second Circuit and the Fifth Circuit. Where the Second Circuit similarly favored broad protections for employee whistleblowers in Berman v. Neo@Ogilvy LLC, the Fifth Circuit took a much narrower view. In Asadi v. G.E. Energy, LLC, the Fifth Circuit ruled that Khaled Asadi, who served as G.E. Energy’s Iraq Country Executive, could not be considered a “whistleblower” when he reported up his chain of command about practices that he believed violated the Foreign Corrupt Practices Act. The Fifth Circuit hinged its analysis on 15 U.S.C. § 78u–6, which defines “whistleblower” as “any individual who provides, or 2 or more individuals acting jointly who provide, information relating to a violation of the securities laws to the Commission, in a manner established, by rule or regulation, by the Commission.” According to the Fifth Circuit, this definition of a whistleblower was “clear,” “unambiguous,” and simply did not protect internal disclosures.

All three courts overlooked a line of cases that have held that reports to company officials are a normal way for workers to commence disclosures that later lead to the government. As such, they deserve the same legal protections as direct disclosures to the government. In Phillips v. Interior Board of Mine Operations Appeals, the D.C. Circuit held that coal miners are protected for making safety complaints to their supervisors. In Kasten v. Saint Gobain Performance Plastics Corp., the Supreme Court held that an oral report to a supervisor about a wage violation is protected under the phrase “filed any complaint.”

Somers v. Digital Realty Trust is still an important victory for whistleblower rights. A narrow interpretation of Dodd-Frank gives employers a perverse incentive to quickly terminate employees after internal disclosures are made, but before they have an opportunity to make a disclosure to the SEC (even though the whistleblowers would still have 180 days to file a SOX retaliation complaint to OSHA). Not only does a narrow interpretation result in serious gaps in legal protection for whistleblowers, but it also completely vitiates the very purpose of federal statutes designed to root out waste, fraud, and abuse.