No Remedy for Rape at West Point 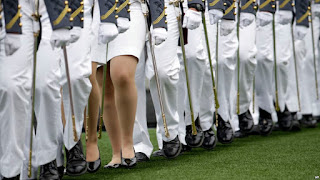 Last month, the federal Court of Appeals for the Second Circuit issued a 2-1 decision holding that a female West Point cadet has no remedy against the Academy’s commanders for their systematic failure to protect women from rape. The decision is an unfortunate continuation of judicial deference to military commanders – a deference that has protected government officials when they lie and discriminate. It also continues a sexist tradition of blaming the victim and ignoring our responsibility to deter rape and provide relief to survivors.

The decision came in the case of Doe v. Hagenbeck. Doe alleged that Lieutenant General Franklin Lee Hagenbeck and Brigadier General William E. Rapp, in their personal capacities, bore liability for her rape by another cadet. Lieutenant General Hagenbeck, Superintendent of West Point from 2006 to 2010, chaired the Sexual Assault Review Board, which is the “primary means of oversight” of the sexual assault prevention and response program at West Point. Brigadier General Rapp, Commandant of Cadets at West Point from 2009 to 2011, was in charge of the administration and training of cadets. Doe alleges that Hagenbeck and Rapp “perpetrat[ed] a sexually aggressive culture” at West Point that “discriminated against female cadets,” “put female cadets at risk of violent harm,” and resulted in her sexual assault.

Doe was raped on May 8, 2010, after accepting a drink from an upperclassman. Doe woke up the next morning in bed, bloodied and bruised, with dirt on her clothes and hair. She remembered lying on the concrete floor of a boiler room, not understanding what was happening. Her examination confirmed vaginal tearing, but no rape kit was administered.

In December 2011, the Defense Department issued its Annual Report on Sexual Harassment and Violence at the Military Service Academies for 2010-2011. It provides many statistics supporting Doe’s claim of a culture that accepted sexual assault, frowned on those who complain, and provided little accountability. The report shows that most women who choose not to report sexual assault do so out of fear for their reputation and future careers.

Accepting each of these facts as true, the Court’s majority still held that federal courts could provide no remedy to Doe. The majority relied on Feres v. United States, a case in which the Supreme Court held that, “the Government is not liable under the Federal Tort Claims Act for injuries to servicemen where the injuries arise out of or are in the course of activity incident to service[.]” Rudolph Feres died in a barracks fire in Pine Camp, New York, and his widow filed a wrongful death claim against the Army alleging that the heating plant was known to be defective and the Army failed to maintain any fire watch.

Feres is one of many cases in which the Supreme Court has been deferential to the military and the Executive Branch on national security matters. In Korematsu v. United States, the Supreme Court permitted the government to forcibly move citizens of Japanese descent into concentration camps. While a monument recalls the suffering of those confined, the Supreme Court has never overturned the original decision.

In United States v. Reynolds, the Supreme Court barred federal courts from forcing the military to release reports deemed to contain national security secrets. Three widows sought compensation for their spouses’ deaths in the crash of an Air Force plane. The spouses worked for RCA. The Air Force claimed that releasing the accident report would expose secret information about its new radio equipment. Although four federal judges upheld a default judgment against the Air Force, the Supreme Court reversed and created the “State Secrets” doctrine barring courts from interfering in government claims of national security. In 2000, the Air Force declassified the crash report which showed their plane had crashed from engine failure. The report had no classified information about the new radios.

Assuming, as we must at this juncture of the case, that the allegations of the amended complaint are true, … Jane Doe was subjected to pervasive and serious sexual harassment, including rape, at … West Point. The harassment resulted from practices and policies that the individual defendants permitted to proliferate and, indeed, implemented or encouraged, depriving Doe of an equal education because of her gender.

I do not agree that the Feres doctrine applies, for in my view Doeʹs injuries did not arise ʺincident to military service.ʺ

Victims of sexual assault also face a long history of attempts to blame them for the crimes committed against them. Too frequently, rapists attempt to escape liability, and government officials deflect responsibility, by claiming that what the victims wore, drank, or said justifies the assaults against them.

Since Doe filed her claims, the Army has stepped up its prosecutions of rapists. This year, it sentenced West Point cadet Jacob Whisenhunt to 21 years in prison for three counts of sexual assault in July 2016. The Army’s report, however, makes no mention of any compensation to the victims.

Just this month, U.S. Secretary of Education Betsy DeVos raised concern for the “dozens upon dozens” of whom she described as male students falsely accused of sexual misconduct because [Obama Administration policies] limited due process for those accused, was confusing, and lowered standards for sexual assault.

Doe’s legal team from Yale University may yet seek rehearing or review by the Supreme Court. In the meantime, young people considering military service may well consider how long traditions and the current state of the law leave them with no remedies in civilian courts. Even if commanders violate the Constitution or make false claims about national security, and even in cases of rape, courts will give no remedy on the ground the survivor chose to serve.