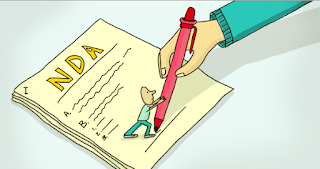 On March 5, 2018, Vox reported that some Capitol Hill interns in Congress—many of whom are unpaid—have been asked to sign nondisclosure agreements. So far, over 20 unidentified interns reported that they had signed the agreements. Two of the agreements quoted in the article are so broad that they do not even allow the reporting of incidents of harassment, discrimination, or other abuse. Without the protection to do so, any intern’s report of harassment or abuse–of either an intern or an employee–could be considered a breach of the nondisclosure agreement with a congressperson’s office and lead to the intern’s removal from the internship without any consequence.

According to Vox, one Congressional intern’s confidentiality agreement provides:

Section 2302 also defines several “prohibited personnel practices,” which in general proscribe certain actions that, if taken against an Executive Branch employee, can result in discipline of the offender. Among these practices is a provision that prohibits any attempt to “implement or enforce any nondisclosure policy, form, or agreement, if such policy, form, or agreement does not contain the following statement: ‘These provisions are consistent with and do not supersede, conflict with, or otherwise alter the employee obligations, rights, or liabilities created by existing statute or Executive order relating to…(2) communications to Congress….’” 5 U.S.C. §2302(b)(13). If that statement isn’t clear enough, Congress added the following:

This subsection shall not be construed to authorize the withholding of information from Congress or the taking of any personnel action against an employee who discloses information to Congress.

Even more significantly, these Agreements required of unpaid interns ignore totally the events of the past year, during which the public learned that several Congressmen who were credibly accused of sexual harassment negotiated settlements with their employee/accusers. These settlements included nondisclosure provisions, and in most instances, the settlement amounts were paid by taxpayers. In February 2018, the House passed amendments to the Congressional Accountability Act of 1995 to give employee victims the ability to pursue claims against Congress members. According to Speaker Paul Ryan in January 2018, the new Act

ensures that victims of workplace harassment have the resources they need to get the justice they deserve. No staffer or member should ever feel unsafe in public service, and this bill will help make that a reality.

It is not clear how Ryan’s statement can be reconciled with the nondisclosure agreements. Moreover, the amendments to which Ryan referred apply only to paid Congressional employees; as noted above, while each Congressional office has the discretion to pay its interns, most interns are unpaid.

Nondisclosure agreements, used appropriately, can protect truly private information that should not be publicly released. Unless these agreements are modified, however, they also protect behavior that should be disclosed and has no place in public life.