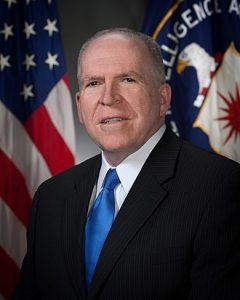 Yesterday, the White House announced that President Trump had revoked the security clearance of John Brennan, the former Director of the Central Intelligence Agency (CIA). The President’s statement claimed the decision was justified by Brennan’s “erratic conduct and behavior” that “tested and far exceeded the limits of any professional courtesy[.]”

The President noted that Brennan told Congress that “the intelligence community did not make use of the so-called Steele dossier in an assessment regarding the 2016 election,” and he continued, saying:

Additionally, Mr. Brennan has recently leveraged his status as a former high-ranking official with access to highly sensitive information to make a series of unfounded and outrageous allegations — wild outbursts on the Internet and television — about this administration. Mr. Brennan’s lying and recent conduct, characterized by increasingly frenzied commentary, is wholly inconsistent with access to the nation’s most closely held secrets, and facilities [facilitates] the very aim of our adversaries, which is to sow division and chaos.

Brennan’s most recent tweet criticized the President for calling Omarosa Manigault-Newman a “crazed, crying lowlife” and a “dog,” and praising his Chief of Staff John Kelly for firing her. Brennan stated:

It’s astounding how often you fail to live up to minimum standards of decency, civility, & probity. Seems like you will never understand what it means to be president, nor what it takes to be a good, decent, & honest person. So disheartening, so dangerous for our Nation.

This tweet is fairly described as a disclosure about “an abuse of authority.” An abuse of authority is an “arbitrary or capricious exercise of power by a federal official or employee that adversely affects the rights of any person or that results in personal gain or advantage to himself or to preferred other persons.”

Individuals of conscience who believe in rule of law should denounce this blatant effort to obstruct justice. As Mr. Trump’s desperation to protect himself grows, he could turn words into actions, prompting a Constitutional crisis. Congress must warn Trump of dire consequences.

Since obstruction of justice is a crime, this tweet can fairly be read to constitute a disclosure of a violation of law.

In 2014, Congress passed the Intelligence Authorization Act, that included protection of a whistleblower’s security clearance. At 50 U.S.C. Section 3341(j)(1), the law prohibits the revocation of an employee’s security clearance because that employee made a lawful disclosure of “ a violation of any Federal law, rule, or regulation; or gross mismanagement, a gross waste of funds, an abuse of authority, or a substantial and specific danger to public health or safety[.]”

The 2014 Act requires each IC agency to implement its own policy against whistleblower reprisals. If the agency determines that a denial of a security clearance was an unlawful reprisal, “the agency shall take specific corrective action to return the employee or former employee, as nearly as practicable and reasonable, to the position such employee or former employee would have held had the violation not occurred.” The agency can also pay up to $300,000 in compensatory damages.

However, if the agency determines that it did nothing wrong, the whistleblower has 60 days to appeal to the DNI. Under procedures made in consultation with the Secretary of Defense and the Attorney General, the DNI gets to make the final decision. There is no appeal to any court, nor any right to file an individual lawsuit.

The odds that any or all of these presidential appointees would declare that the President himself violated the law seems too remote to build confidence in this system. If Congress wants to assure that employees in the IC will trust that they are protected if they disclose wrongdoing, it needs to provide for appeals to independent tribunals and eventually to the courts. IC employees can already bring discrimination claims to civilian courts, and the same procedures could be used in whistleblower cases.

Using the civilian Whistleblower Protection Act (WPA) would be one way to accomplish this goal. Employees covered by the WPA can make complaints to the Office of Special Counsel, appeal to the Merit Systems Protection Board (MSPB), appeal further to the federal Courts of Appeals, and if their claim is mixed with a claim of discrimination, they can file a civil lawsuit and seek a jury trial.

Now would be a good time for Congress to expand the coverage of the WPA to extend these protections to employees of the Intelligence Community.