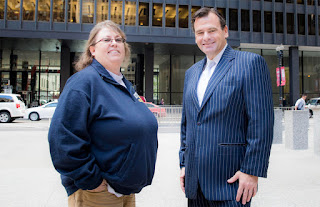 On July 15, 2015, the EEOC issued a groundbreaking decision in Baldwin, finding that Title VII includes claims of sexual orientation discrimination. KCNF Associate Valerie Chastain analyzed this case in her July 22, 2015 blog post, The EEOC’s Evolution of Justice for LGBT Workers.

Second, sexual orientation discrimination “is associational discrimination on the basis of sex.” That is, the employer takes the employee’s sex into consideration by treating him or her differently for associating with a person of the same sex.

Notwithstanding the Commission’s reasoning, courts have refused to stray from traditional notions of “sex” discrimination: excluding sexual orientation and sexual preference. As the Supreme Court held in Oncale v. Sundowner Offshore Services, Inc., however, “statutory prohibitions often go beyond the principal evil [they were passed to combat] to cover reasonably comparable evils, and it is ultimately the provisions of our laws rather than the principal concerns of our legislators by which we are governed.” (In Oncale, the Court ruled that same-sex harassment is actionable under Title VII). In fact, protecting against sexual orientation discrimination under Title VII would not create a new class of covered persons. For example, when the Court decided that Title VII protected persons discriminated against because of their employer’s gender stereotypes, it “did not thereby create a new protected class of ‘masculine women.’”  Courts should go where the principles of Title VII direct and the Commission held—applying existing Title VII principles to encompass sexual orientation discrimination.

Recently, the Seventh Circuit recognized the incongruity of denying sexual orientation claims while allowing gender non-conformity claims—which courts recognize as a form of sex-based discrimination under Title VII. In Hively, appellant worked as a part-time adjunct professor. Despite qualifying for full-time employment, the college refused to interview her for any of the six full-time positions for which she applied between 2009 and 2014 and did not renew her part-time employment contract in July 2014. Alleging that she had been blocked from full-time employment without good cause because of her sexual orientation, appellant filed a sexual orientation discrimination complaint with the EEOC. The college’s defense was that Title VII does not apply to claims of sexual orientation discrimination. Although the court made it clear that it does not condone discrimination in any form, it found itself constrained by its prior decisions—claiming that Congress had a very narrow understanding of the term “sex” when it passed Title VII—and dismissed Hively’s claim for failure to state a claim. Significantly, however, the court noted that it “would be remiss” not to cogitate on the EEOC’s recent decision in Baldwin, in which it concluded that sexual orientation is inherently a sex-based consideration.

Citing Baldwin, the court questioned whether there is any real distinction between gender non-conformity and sexual orientation discrimination, noting that, at most, the borders are imprecise.

1) Dismiss a gender-nonconformity claim outright if there is “any hint of a claim that the employer also engaged in sexual orientation discrimination.” This is the process followed by the Second, Third, Sixth, and Seventh Circuits, New York, Florida, Georgia, and New Jersey. The absurd result being that “the law protects effeminate men from employment discrimination, but only if they are (or are believed to be) heterosexuals.” Thus, when determining whether a claim for gender non-conformity can stand, “the critical fact under the circumstances is the actual sexual orientation of the harassed person.”

2) Try to “tease the two apart” and look “only at those portions of the claim that appear to address cognizable gender non-conformity discrimination.” This is the process followed by the Third and Fifth Circuits and Florida. Attempts to “identify behaviors that are uniquely attributable to gay men and lesbians[, however,] often lead to strange discussions of sexual orientation stereotypes.” For example, in Prowel v. Wise Business Forms, Inc., a factory worker who described himself as both gay and effeminate succeeded in having his case heard by producing just enough evidence of harassment based on gender stereotypes, as opposed to sexual orientation. Specifically, Prowel convinced the court that he displayed stereotypically feminine characteristics by testifying that “he had a high voice, did not curse, was well-groomed, neat, filed his nails, crossed his legs, talked about art and interior design, and pushed the buttons on his factory equipment ‘with pizzazz.’”

an uncomfortable result in which the more visibly and stereotypically gay or lesbian a plaintiff is in mannerisms, appearance, and behavior, and the more the plaintiff exhibits those behaviors and mannerisms at work, the more likely a court is to recognize a claim of gender non-conformity which will be cognizable under Title VII as sex discrimination.

As it stands, Title VII protects gay, lesbian, and bisexual people only to the extent that they do not deviate from society’s stereotypical norms about how they should look or act, i.e., that gay men are effeminate and lesbian women are masculine. It is illogical “to entertain gender non-conformity claims under Title VII where the non-conformity involves style of dress and manner of speaking, but not when the gender non-conformity involves the sine qua non of gender stereotypes—with whom a person engages in sexual relationships.”

Furthermore, with the passage of the Defense of Marriage Act (“DOMA”), the conflicting case precedent creates the

paradoxical landscape in which a person can be married on a Saturday and then fired on Monday for just that act. For although federal law now guarantees anyone the right to marry another person of the same gender, Title VII, to the extent it does not reach sexual orientation discrimination, also allows employers to fire that employee for doing so.

To overturn circuit precedent, the Seventh Circuit required that a “compelling reason,” such as when

the rule has proven to be intolerable simply in defying practical workability . . . whether related principles of law have so far developed as to have left the old rule no more than a remnant of abandoned doctrine . . . or whether facts have so changed, or come to be seen so differently, as to have robbed the old rule of significant application or justification[.]

Given this requirement, it is perplexing that the court’s lengthy recitation of how current applications of Title VII have led (and continue to lead) to incompatible results and utter confusion was not enough for it to hold that Title VII, as currently applied, is “intolerable simply in defying practical workability.” Although the Seventh Circuit admitted that the EEOC’s interpretation of Title VII, as the enforcing agency, is entitled to some level of deference, citing Griggs v. Duke Power Co. (administrative interpretation is entitled to “great deference”)), the court failed to “delve into a discussion of the level of deference [] owe[d] to the EEOC’s rulings” because it ultimately concluded that Title VII does not reach sexual orientation discrimination.

The Seventh Circuit’s cursory treatment of the Commission’s position—that sexual orientation claims are cognizable under Title VII as a form of sex discrimination—is inconsistent with the Supreme Court’s holding in Chevron, U.S.A., Inc. v. Natural Resources Defense Council, Inc. In Chevron, the Court stated that

considerable weight should be accorded to [an agency’s] construction of a statutory scheme it is entrusted to administer, and the principle of deference to administrative interpretations has been consistently followed by this Court whenever decision as to the meaning or reach of a statute has involved reconciling conflicting policies, and a full understanding of the force of the statutory policy in the given situation has depended upon more than ordinary knowledge respecting the matter subjected to agency regulations.

Where Congress “has not directly addressed the precise question at issue,” the “question for the court is [only] whether the agency’s answer is based on a permissible construction of the statute.” The court cannot substitute its own construction of a statutory provision for that of the agency. Thus, in the absence of a Supreme Court decision or a change in legislation to clarify “sex” discrimination as inclusive of sexual orientation discrimination, courts should defer to the Commission’s decision in Baldwin. That did not happen here.

In response to the Seventh Circuit’s refusal to acknowledge her claim for sexual orientation discrimination, Hively filed a petition for rehearing en banc “to secure and maintain uniformity of the law” on August 25, 2016.

On August 29, 2016, the EEOC filed an amicus brief in support of Hively’s Petition. In its brief, the Commission reaffirms its position that claims of sexual orientation discrimination are cognizable under Title VII as claims of sex discrimination because such claims “necessarily involve consideration of a plaintiff’s sex, gender-based associational discrimination, and sex stereotyping.” The Commission also argues that the jumble of inconsistent precedents set by the courts defies practical workability and is inconsistent with two Supreme Court decisions: Oncale v. Sundowner Offshore Services, Inc. (statutes must be interpreted as written even when the language goes beyond the principal evil Congress sought to address) and Price Waterhouse v. Hopkins (Title VII makes sex “irrelevant” in employment decisions). To date, the Seventh Circuit has not made a decision on whether it will revisit the issue.

Today’s society recognizes that people are heterosexual, homosexual, or bisexual. Consistent with this change in public policy, the EEOC and Supreme Court have recognized, as noted supra, that federal laws apply equally to all persons, regardless of sexual identity. Any interpretation of Title VII that fails to recognize this diversity of sexual identity fails to cover the reasonably comparable evils as violations of Title VII’s prohibition of “sex” discrimination and cannot stand.

(Photo is of Ms. Hively and her counsel.)