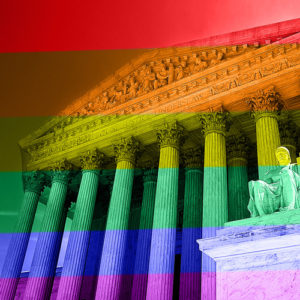 Driving home the point, the Court states: “The statute’s message for our cases is equally simple and momentous: An individual’s homosexuality or transgender status is not relevant to employment decisions. That’s be­cause it is impossible to discriminate against a person for being homosexual or transgender without discriminating against that individual based on sex.”

The Court’s final conclusion: “In Title VII, Congress adopted broad language mak­ing it illegal for an employer to rely on an employee’s sex when deciding to fire that employee. We do not hesitate to recognize today a necessary consequence of that legislative choice: An employer who fires an individual merely for be­ing gay or transgender defies the law.”

Today’s historic victory for the LGBTQI community is really a victory for all Americans who want to live in a land of equal employment opportunity. Moreover, the strength of today’s decision is not limited to members of the LGBTQI community. Every employee will be able to use aspects of the Court’s holdings in a wide variety of discrimination and retaliation claims.

The Court makes clear that Americans are protected whenever their protected status is one of the reasons for an adverse employment action. It does not have to be the only reason or even the primary reason. “[T]he adoption of the traditional but-for causation standard means a defendant cannot avoid liability just by citing some other factor that contributed to its challenged employment decision. So long as the plain­tiff’s sex was one but-for cause of that decision, that is enough to trigger the law.” In other words, the employee still has a valid claim if sex made a difference in the outcome.

The decision makes a keen observation about how the law protects each individual as an individual:

It’s no defense for the employer to note that, while he treated that individual woman worse than he would have treated a man, he gives preferential treatment to female employees overall. The employer is liable for treating this woman worse in part because of her sex. Nor is it a defense for an employer to say it discriminates against both men and women because of sex. This statute works to protect indi­viduals of both sexes from discrimination, and does so equally. So an employer who fires a woman, Hannah, be­cause she is insufficiently feminine and also fires a man, Bob, for being insufficiently masculine may treat men and women as groups more or less equally. But in both cases the employer fires an individual in part because of sex. In­stead of avoiding Title VII exposure, this employer doubles it.

The Court rejects employer attempts to argue that they did not “perceive themselves as motivated by a desire to discriminate.” “[I]t’s irrelevant what an employer might call its discriminatory practice, how others might label it, or what else might motivate it.” This holding confirms what psychologists have been saying for years: almost everyone has biases that they are not aware of. This holding will be useful to every claimant who faces an employer that claims they are not biased or had some other reason for treating the employee adversely.

None of the employers in today’s case preserved a defense based on their religious objections. The Court left open the door to religious objectors to assert a defense under the Religious Freedom Restoration Act of 1993 (RFRA). That statute prohibits the federal government from substantially burdening a person’s exercise of religion unless it demonstrates that doing so both furthers a compelling governmental interest and represents the least restrictive means of furthering that interest. However, the Masterpiece Cakeshop decision made clear that while individuals are protected from discrimination on account of their religion, their religion normally gives them no right to discriminate against others.  Title VII has an exclusion for religious organizations and the Supreme Court has separately protected religious organizations from employment claims by their religious officials.

Our blog about the Masterpiece Cakeshop decision is at: https://kcnfdc.com/blog/masterpiece-cakeshop-decision-provides-a-useful-tool-for-other-discrimination-cases/

The majority opinion does not explicitly address the rights of bisexual or intersex individuals, but the logic of today’s decision makes it inescapable that they are also protected from employment discrimination. The dissent specifically considered their cases, and the majority decision in the face of this dissent should encourage everyone in the LGBTQI spectrum.

The Court considered the dissent’s claim that the original drafters of the Civil Rights Act could not have intended it to protect homosexuals and transgender persons. To the contrary, the majority opinion is rooted in the text of Title VII, and the historical context is inescapable. “Accepting this point, too, for argument’s sake, the ques­tion becomes: What did ‘discriminate’ mean in 1964?” Those who recall the role of James Baldwin, Bayard Rustin, or Lorraine Hansberry in the Civil Rights Movement have understood the meaning from the beginning.

Moreover, the Court looked at the intention of Representative Howard Smith (D-VA). “On some accounts, the congressman may have wanted (or at least was indifferent to the possibility of) broad language with wide-ranging effect. Not necessarily because he was interested in rooting out sex discrimination in all its forms, but because he may have hoped to scuttle the whole Civil Rights Act and thought that adding language covering sex discrimination would serve as a poison pill.” Irrespective, the broad language remains helpful and appropriate today.  As the Court states, “when Congress chooses not to include any exceptions to a broad rule, courts apply the broad rule.” Ironically, because Rep. Smith’s intention was to scare people away from Civil Rights, the broadest possible interpretation of “sex” would have furthered that goal. Today, that broadest possible interpretation, the correct interpretation for all people, prevails.