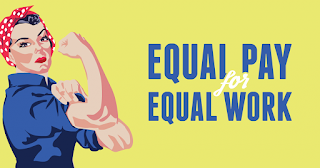 The Equal Pay Act was passed 50 years ago this week.  As the EEOC proclaimed:

Although we have come a long way since the days when gender-based salary inequities were explicitly condoned by law and corporate policies, vestiges of the past persist. Women continue to earn significantly less than men, even controlling for factors such as occupation, educational level, and hours worked. The gender pay gap is even larger when race and national origin are factored in for African American and Latina women.

Did you know that it used to be perfectly legal for employers to place separate job advertisements in newspapers for men and women? It’s true: jobs were categorized according to sex, with the higher level jobs listed almost exclusively under “Help Wanted—Male.” In some cases the ads ran identical jobs under male and female listings—but with separate pay scales. Separate, of course, meant unequal: between 1950 and 1960, women with full time jobs earned on average between 59–64 cents for every dollar their male counterparts earned in the same job.

What do you need to know about the Equal Pay Act? And how does it relate to Title VII of the Civil Rights Act, which prohibits discrimination on the basis of (as well as race, religion, and national origin)?

The Equal Pay Act compares employees based upon the jobs they do within the same organization.  It was passed after evidence showed that employers had sets of employees performing the same work with different titles.  For example, a corporation may have had a career field called “junior executive” in which all of the employees were male.  There was a separate career field called “administrative aide” filled exclusively by females.  Yet both sets of employees did precisely the same duties, with the same level of supervision.  Yet the “junior executive” salary was substantially more than the “administrative aide” salary.

To address this inequity, the Equal Pay Act provides that the law is violated if a male and female are doing “substantially” equal work, requiring the same skill, effort and responsibility, and under similar working conditions in the same facility.  The jobs need to be “substantially equal” but do not have to be “identical” to fall under the protection of the Equal Pay Act. An employer cannot, for example, change the job titles of women workers in order to pay them less than men. Schultz v. Wheaton Glass Co., (3d Cir. 1970).  And employers cannot justify paying women lower wages because that is what they traditionally received under the “going market rate.” A wage differential occurring “simply because men would not work at the low rates paid women” is unacceptable. Corning Glass Works v. Brennan, (Supreme Court,1974).

Even if the employee establishes the disparity in pay, the employer can still avoid liability.  Pay differentials are permitted when they are based on seniority, merit, quantity or quality of production, or a factor other than sex. These are known as “affirmative defenses,” and it is the employer’s burden to prove that they apply.

What can count as a “factor other than sex”? Suppose, for example, that the male employee goes  to his job interview, gets an offer, turns it down and negotiates for a higher salary. In her new book, Lean In, Sheryl Sandberg says that even in 2013, women typically accept the first salary offer they get, whereas men typically try to negotiate for a higher salary.  Or suppose there’s a shortage in a job category, so when the male candidate interviews for the job, the employer offers a higher salary than was offered when a female candidate was hired the previous year.  All of these scenarios would satisfy the employer’s burden to demonstrate that the salary disparity is based on a factor other than sex.

One issue that came to a head in 2009 involved the deadline for bringing a complaint of denial of equal pay for equal work.  The law requires that a complainant file suit within 6 months (180 days) of the date of the denial of equal pay.  But how does a woman who wants to bring a case find out what her male co-workers are making?

One woman,  Lilly Ledbetter, worked for the Goodyear tire company in Alabama as a production supervisor.  She argued that she did not file her suit when the company first set her pay, because she did not know what her male co-workers were making.  She contended that over the years, each time she got a pay check that was lower than a male got for doing the same work was a new violation of the act.  Her equal pay case went to the US Supreme Court, where a majority held in 2007 that to meet the deadline, she would have had to file her suit within 180 days of the initial decision setting her pay level lower than that of a male co-worker. Ledbetter v. Goodyear Tire & Rubber Co., 550 U.S. 618 (2007).  In 2009, new legislation was passed, providing that the 180-day statute of limitations for filing an equal-pay lawsuit regarding pay discrimination resets with each new paycheck affected by that discriminatory action.

An employee bringing a sex discrimination in employment act can sue under both Title VII and the Equal Pay Act.  For winning, the employee cannot get duplicative relief.  However, there are some differences in the possible relief under the two acts.  Under Title VII, an employee can receive back pay, compensatory damages for pain and suffering, and attorney fees.  Under the Equal Pay Act, an employee can receive “liquidated damages,” meaning double the salary difference if it can be shown that the violation was “wilful.”


The lawyers of Kalijarvi, Chuzi, Newman & Fitch are very experienced in the complexities of Equal Pay Act litigation.  If you believe you have been denied equal pay for equal work, please call us today.

This blog is provided to our readers for informational purposes only. It is not offered as legal advice. Communication of information through this blog does not create an attorney-client relationship. You should not rely upon information contained in this blog without first seeking professional legal advice. If you would like a telephone screening or consultation with a KCNF attorney, you are welcome to call 202-331-9260 to begin our intake process, or submit your legal issue at http://www.kcnlaw.com/Contact.shtml.