The Future of Diversity & Inclusion Training Under Executive Order 13950 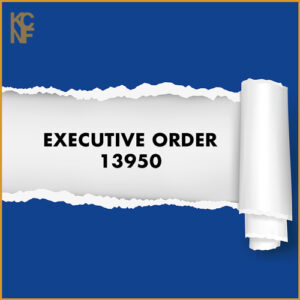 On September 22, 2020, on the heels of Election Day, President Donald J. Trump signed Executive Order (“E.O.”) 13950, which will have far-reaching effects on diversity and inclusion training throughout the Federal government and in government contracting. With a stated purpose “to combat offensive and anti-American race and sex stereotyping and scapegoating,” the E.O. enumerates prohibited training topics, including some that may have a negative impact on affirmative action-related training; training that references implicit or unconscious bias and systemic discrimination; and training that references certain microaggressions:

Such potential negative impact is reflected in the U.S. Department of Labor’s guidance on the E.O., which states, “Unconscious or implicit bias training is prohibited to the extent it teaches or implies that an individual, by virtue of his or her race, sex, and/or national origin, is racist, sexist, oppressive, or biased, whether consciously or unconsciously.”

To ensure compliance with its prescripts, Section 7 of the E.O. requires agencies to submit to the U.S. Office of Personnel Management (“OPM”) for review all diversity and inclusion training programs, including programs developed prior to the issuance of this E.O., as well as new programs that may be proposed or established after its effective date (September 22, 2020). OPM’s instructions for implementation are forthcoming, but it has advised that it will review materials in the order they are submitted.

Utilizing training programs in violation of the E.O. carries with it potentially significant consequences. Under Section 6(b), performance-based adverse action (under chapter 43 or 75 of title 5, Unites States Code) “shall” be pursued against any Federal supervisor or employee with responsibility for promoting diversity and inclusion who authorizes or approves training that promotes the divisive concepts set forth in Section 2(a).

The requirements of this E.O. also extend to contractors, who face potential debarment from federal contracting for teaching, advocating, or promoting the divisive concepts set forth in Section 2(a). Given that the definition of “divisive concepts” (Section 2(a)) creates many gray areas likely to result in different interpretations, many companies are suspending all diversity and inclusion training—and outcome contrary to the E.O.’s stated purpose.

In an October 15, 2020 letter to President Trump, joined by roughly 150 other business and nonprofit groups, the U.S. Chamber of Commerce urged the President to withdraw and rework E.O. 13950, finding the language on prohibited content in diversity and inclusiveness training too ambiguous: “As currently written, we believe the E.O. will create confusion and uncertainly, lead to non-meritorious investigations, and hinder the ability of employers to implement critical programs to promote diversity and combat discrimination in the workplace.” The Chamber expressed concerns that the ambiguity and subjective nature of what constitutes a divisive concept has already had a “broadly chilling effect” on businesses’ legitimate training programs: with the ultimate threat of debarment, some companies have suspended all diversity and inclusion training.

In a separate October 14, 2020 letter calling on President Trump to rescind E.O. 13950, the American Hospital Association (“AHA”) averred that, “Prohibiting federal agencies from conducting and funding trainings that promote racial reconciliation is counterproductive to addressing racism.” In the current COVID-19 pandemic, which the AHA recognizes has a disproportionate effect on minorities,

[v]ital research conducted at the National Institutes of Health and academic centers to comprehend the effects of structural racism and implicit bias on health care and health outcomes is needed right now more than ever before. However, this research is threatened by EO 13950’s unprecedented attack on scientific freedom.

This E.O. works in concert with M-20-34, Training in the Federal Government, released by the U.S. Office of Management and Budget (“OMB”) on September 4, 2020. In that Memorandum, Director Russell Vought announced that OMB will issue more detailed guidance on implementing the President’s directive to “cease and desist from using taxpayer dollars to fund . . . divisive, un-American propaganda training sessions” and that, in the interim,

all agencies must begin identifying all contracts or other agency spending related to any training on “critical race theory,” “white privilege,” or any other training or propaganda effort that teaches or suggests either (1) that the Unites States is an inherently racist or evil country or (2) that any race or ethnicity is inherently racist or evil.

While Agencies, federal contractors, and federal grant recipients should continue coming into compliance with the E.O., litigation seeking to enjoin implementation of or invalidate the E.O. is likely.