The Measurable Impact of Racism 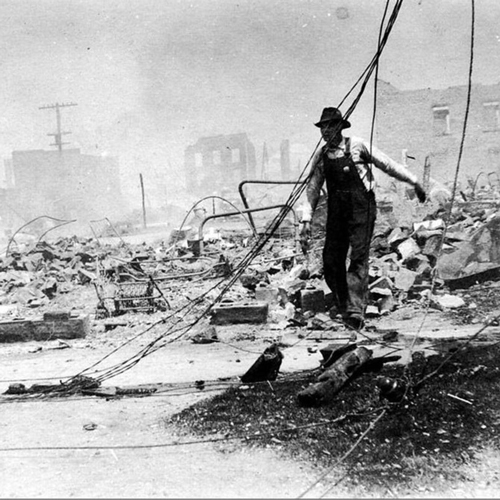 The 1921 Tulsa Race Massacre, Published in the Harvard-Gazette, Harvard University

There is a wide variety of responses to the suffering of other people. For those who are interested, the evidence of racism in America is in plain sight.

Average White family wealth in America is currently seven times that of Black family wealth. Median White family net worth is ten times that of median Black family net worth ($17,150 to $171,000). The disparities increase as Americans get older, and wealth inequality has increased dramatically in recent decades. Since 1963, the wealth of the top 1% has increased seven-fold while the bottom 10% have gone from having no wealth to actually being in debt.

Current federal policies exacerbate the disparity. Of the $400 billion the federal government spends for asset development, most goes to affluent families. Employer sponsored retirement plans, and deductions for mortgage interest and state and local property taxes, provide little benefit to those who work without retirement benefits and without homeownership. While Social security benefits are literally the difference between life and death for many people, the benefit is partially determined by earnings prior to retirement, and this part actually perpetuates the disparity in wealth.

Understanding how we got here requires understanding our history. The wealth created by slaves for over two centuries before the Civil War all went to Whites. Following emancipation during the Civil War, the federal government compensated former slave owners in the District of Columbia for the value of their slaves. After the War, the government reneged on its promise of 40 acres and a mule for freed slaves.

As Blacks began voting, they faced ballot-stuffing, intimidation and lynching. When the federal government mismanaged the Freedmans Savings Bank, it cost 61,144 freed slaves almost $3 million in savings in1874. The contested 1876 election was settled in Congress with an agreement ending all Reconstruction efforts. The ensuing Jim Crow laws institutionalized segregation and unequal opportunity for generations. When Blacks developed a thriving business community in Tulsa (the so-called “Black Wall Street”), Whites massacred them and burned down the community in 1921.

While the Civil Rights Movement succeeded in ending legalized discrimination, those in power continue to test the limits of liability, remedies and enforcement. Most of the largest companies in the U.S. use forced arbitration to avoid altogether having a jury decide claims against them. In 2013, the Supreme Court issued its decision in Shelby County v. Holder striking down enforcement clauses in the Voting Rights Act because, the court said, the racism of the 1960’s no longer reflects voting conditions today.

The effects of racism are apparent in our economy, our history and in individuals. “A victim of discrimination suffers a dehumanizing injury as real as, and often of far more severe and lasting harm than, a blow to the jaw[.]” Mardell v. Harleysville Life Ins. Co., (3d Cir., 1995). This year, the effects of racism include blows to the jaw, bullets in the back, and knees to the neck.

While we at KCNF work every day to vindicate the rights of employees suffering from discrimination, our nation continues to suffer from its history of disparity and its current institutional policies that amplify its effects. Achieving a just society will require a profound effort at every level of government and from every voter.