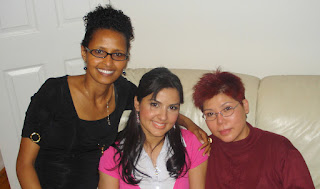 On July 6, 2016, the Fourth Circuit issued its decision in Guessous v. Fairview Properties Investments, Inc. In reversing summary judgment for the defendant on all claims, the Guessous Court agreed with an amicus brief filed by the Equal Employment Opportunity Commission (EEOC).

Monica Guessous (pictured, in the middle position; photo courtesy of Ms. Guessous) is an Arab Muslim woman from Morocco. She was an assistant property manager and bookkeeper for FPI from 2007-2013. In 2008, Greg Washenko (a white Christian American) became FPI’s new Chief Financial Officer. During Washenko’s initial “meet and greet” session, he told Guessous that he had previously worked with “a bunch of Middle Easterners and they are a bunch of crooks, [who] will stop at nothing to screw you,” and he thereafter subjected Guessous to close supervision. Guessous testified that Washenko’s behavior upset her and made her feel that she did not belong. “He made me feel like an outsider,” she testified. “He put this disease in me, where I was more aware that I was a foreigner, that I was different.” Guessous frequently left the office to cry in her car or the restroom. She testified that the harassment affected her concentration and her ability to do her job.)

On December 6, 2012, Guessous confronted Washenko about his treatment of her. She told him that she felt targeted by him because she was an Arab Muslim woman from Morocco. She said, “I’m a new mom. I can’t do this. My work environment needs to be healthy. It has not been healthy. Please let’s put this behind us.” Washenko stated that he decided to fire Guessous around the time of this conversation. Washenko informed Guessous of her termination in March 2013.

The district court granted summary judgment and Guessous appealed. In its amicus brief, the EEOC urged reversal. The EEOC argued that the lower court failed to consider the “totality of the circumstances,” citing to Conner v. Schrader-Bridgeport Int’l, Inc. and Harris v. Forklift Sys., Inc. The hostility of Guessous’s working environment must be viewed “from the perspective of a reasonable person in her position.” The Commission’s brief continues:

Although Washenko’s comments were less frequent than those found to constitute a hostile work environment in some other cases, see, e.g., Amirmokri v. Baltimore Gas & Elec. Co., 60 F.3d 1126 (4th Cir. 1995), each comment carried a lasting impact. Guessous felt profoundly demeaned, and Washenko reinforced this feeling by obsessively checking up on her (and no one else)[.]

The Court of Appeals said that Washenko’s first comment to Guessous “set the stage for Guessous’ and Washenko’s working relationship from that point forward.” This holding makes clear that courts must consider how one hostile comment can affect the employee’s perception of other hostile comments and actions. Even though the other hostile actions might not be explicitly discriminatory, they can add to the material impact of another hostile action that is more clearly discriminatory. The Commission argued, “The question at the summary judgment stage is not whether a jury is sure to find a verdict for the plaintiff; the question is whether a reasonable jury could rationally so find.”

The appellate court agreed. The Court held that summary judgment was improper because the trial judge had limited his consideration to one comment (about “camel people”) that it considered overtly racial. The Court added that Washenko’s first comment to Guessous, “set the stage for Guessous’ and Washenko’s working relationship from that point forward.” “The manner in which Washenko delivered this statement left Guessous feeling less than human, a hallmark of racially insensitive conduct.” This is not a determination that is suitable for summary judgment and the district court erred when it “put itself in the place of the jury.”

As to whether the hostility was severe or pervasive, “the district court erred by failing to take into account the totality of the circumstances[.]” A trial court must consider “intimidating and intrusive management,” whether the victim “felt demeaned” and “the underlying assumption that she was not to be trusted.” “The evidence suggests Washenko thought Guessous was untrustworthy—and intended to make that clear to her—from the moment she disclosed her origins to him at their initial meeting.”

Courts have long held that “whether harassment was sufficiently severe or pervasive is quintessentially a question of fact,” and here Guessous has presented diverse evidence sufficient to create a material dispute as to the severity of the unwelcome conduct.

The Fourth Circuit also held that trial courts were required to consider whether the environment “unreasonably interfere[d] with [Guessous’] work performance”:

[Guessous] often left the office to cry and that she was concerned about how the stress from her work environment might affect her pregnancy—that Guessous’ “psychological well-being” was at risk, which “is, of course, relevant to determining whether the plaintiff actually found the environment abusive.”

On February 10, 2016, the Sixth Circuit issued its decision in Smith v. Rock-Tenn Services, Inc., a same-sex harassment case. The Smith Court noted that:

The Supreme Court has construed Title VII to allow hostile work environment claims where the harasser and the victim are of the same sex. Oncale v. Sundowner Offshore Servs., Inc., 523 U.S. 75, 82, (1998).

The real social impact of workplace behavior often depends on a constellation of surrounding circumstances, expectations, and relationships which are not fully captured by a simple recitation of the words used or the physical acts performed. Common sense, and an appropriate sensitivity to social context, will enable courts and juries to distinguish between simple teasing or roughhousing among members of the same sex, and conduct which a reasonable person in the plaintiff’s position would find severely hostile or abusive.

Following Oncale, the Court held that a plaintiff alleging same-sex harassment in hostile work environment cases can establish the inference of discrimination based on sex in three ways:

(1) where the harasser making sexual advances is acting out of sexual desire; (2) where the harasser is motivated by general hostility to the presence of men [or women] in the workplace; and (3) where the plaintiff offers ‘direct comparative evidence about how the alleged harasser treated members of both sexes in a mixed-sex workplace.’

The Court also rejected the employer’s contention that the harassment was “horseplay” and not harassment, explaining that the issue is one for the trier of fact after hearing the evidence. This means that summary judgment is unsuitable in making this type of determination.

As to the severity or pervasiveness of the harassment, the Smith Court explained:

(The Smith Court erred in referring to “severe and pervasive” harassment. Under Harris v. Forklift Sys., the legal standard is whether the harassment is severe or pervasive.) Again, this means that courts should not dismiss HWE claims when there is evidence that would permit a jury to find in favor of the victim.