Last week, the Department of Labor’s Whistleblower Protection Advisory Committee (WPAC) met at the Frances Perkins Building, DOL’s headquarters. The Occupational Safety and Health Administration (OSHA) selected the WPAC in 2012 to represent a diverse group of leaders from labor, business and the public.  The committee members came together for two days, one devoted to workgroup meetings, and the other for a full committee meeting. 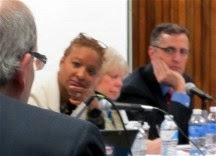 He explained how President Obama’s budget proposed to increase the funding and staffing of OSHA’s Directorate of Whistleblower Protection Programs (DWPP). If the budget is approved, DWPP will increase its budget from $17 million to $21.2 million, and it will increase its staff from 131 to 158.  This number of staff people reflects both the 14 staff at DWPP and 117 who work for the Regional Directors around the country. Dr. Michaels indicated that some of the new staff would be assigned cases arising from particular laws. In any event, the report indicates an administration commitment to apply increased funding to reduce the backlog and make the whistleblower protectin program more effective. Dr. Michaels described OSHA’s lawsuit against AT&T for suspending 13 workers who reported injuries and its order against Gaines Motor Lines awarding over $1 million to four truck driver whistleblowers. He also reported on plans to develop a dedicated whistleblower training staff, something OSHA has never had before.Dr. Michaels announced that he intends to renew the WPAC’s charter and make new appointments (which could be re-appointments of the current members) with staggered terms. Richard Mendelson, the acting director of DWPP, announced that last year they cut the backlog by 134 cases.  They received 2,920 new complaints and closed 3,081. They are still working on developing centralized statistics that will hopefully provide more detail. Appeals of Section 11(c) dismissals are now taking an average of 249 days. They now have 43 pending appeals. They are working on an outreach plan, promulgating regulations, and expanding the alternative dispute resolution (ADR) pilot program. The find that OSHA’s early resolution program, in which OSHA staff are more directly involved, is a more effective ADR program.

The Transportation Industry Work Group reported inconsistent application of OSHA policy on disclosing information during investigations. It noted that OSHA’s organization into autonomous regions makes it harder to obtain uniform application of DWPP policy.  The group sought consensus on a call for protection of workers who report injuries some time after the injury occurred. Some, but not all, the management side representatives were in agreement with this principle.My favorite quote of the day came from a representative of the Federal Aviation Administration.  He explained how the FAA follows OSHA determinations in AIR-21 whistleblower cases.  If OSHA finds retaliation occurred, then the FAA can impose a civil penalty on the employer for suppressing safety concerns.  This representative, whose name I did not catch, explained how American airlines depend on worldwide networks of pilots and mechanics.  He was concerned that in one case, OSHA denied protection because the airline had assigned the employee to work outside the U.S.  He said that OSHA’s failure to protect all the employees of U.S. airlines, “can have a very large impact on the industry.” He called for application of AIR-21 to employees of U.S. airlines throughout the world.In the time set aside for public comments, I offered to the attenders the opportunity to purchase the program of the Fall Seminar of the National Employment Lawyers Association (NELA), calledShining The Light On Whistleblower & Retaliation Claims. I also offered my Whistleblower Flyer for Low-Income Workers Clinics, and my chart of federal whistleblower protections. Given the open microphone, no one else chose to speak — curious for a whistleblower meeting.WPAC Chair, Emily Spieler, noticed that several of the working groups reported (1) issues of data collection and metrics, (2) underreporting problems, (3) training concerns and (4) needing a process for handling issues not within the scope of any one working group.  She suggested that if issues cannot be resolved by consensus within a working group, they could be brought to the full committee for resolution. She also noticed that there is room for further inter-agency work and memoranda of understanding (MOUs). Finally, Nancy Lessin asked that the committee listen to the stories of actual whistleblowers “whose lives are wrecked by retaliatory behavior.” She would find such stories more moving than statistics.By Richard Renner