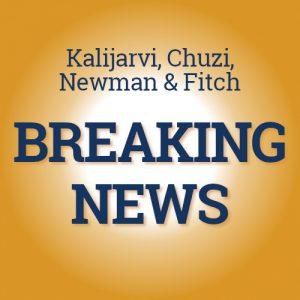 The complaint alleges that the General Schedule (GS) plaintiffs are entitled to a 25% hazard pay differential under Title 5, because they were exposed to “hazardous working conditions through the performance of their assigned duties and that the hazardous duty had not been taken into account in the classification of their positions.”  A “virulent biological” like the coronavirus would clearly qualify as a hazard under Title 5.  Similarly, Wage Grade (WG) plaintiffs are entitled to an 8% environmental pay increase for exposure to micro-organisms.

“Each day front-line federal employees willingly risk their health and their families’ health to provide critical services to the American people. It is our hope that the government does right by these employees and pays them the hazardous duty pay they’ve earned,” said AFGE National President Everett Kelley. “I also implore Congress to pass legislation to provide hazardous duty pay to all front-line federal employees not already covered by existing laws like our Nurses in federal prisons, Transportation Security Officers at airports, and health care workers at the VA who provide direct patient care to our nation’s veterans.”

Three of the plaintiffs in the case work at FCC Oakdale, in Louisiana.  One of the plaintiffs is a correctional officer.  Last Thursday, he was told to take an inmate to the hospital.  When he asked his supervisor if he needed a mask, he was told no.  He travelled in a van with the inmate and sat in a hospital room with the inmate with no protective gear whatsoever despite their close proximity to each other.  The inmate tested positive.

“Federal employees are risking their lives and the lives of their families every day when they leave their homes.  As just one example, federal prisons are already dangerously understaffed, and now they are a petri dish for COVID-19.  Yet, tens of thousands of Bureau of Prisons employees are still showing up to do their job every day,” said Heidi Burakiewicz, partner at KCNF DC.  “Department of Veterans affairs employees, including janitorial and maintenance staff, have also been working for weeks in facilities where there have been documented cases of COVID-19.  All of these men and women, and many others working in jobs across the federal government, have met the legal standards outlined in Title 5 and the government needs to give them their hazard pay differential.”

The COVID-19 situation is constantly changing, but as of March 29, the federal prison complex at Oakdale, Louisiana alone has:

Despite all of this, the institution did not lockdown the inmates in their cells until Saturday night (3/21).  That means that the almost 1000 inmates at FCI 1 Oakdale have been going to their work assignments and going to the dining hall for their meals, despite COVID-19 running rampant in the institution.

Questions federal employees have about the case can be emailed to the law firm at COVID19HazardPay@kcnlaw.com.