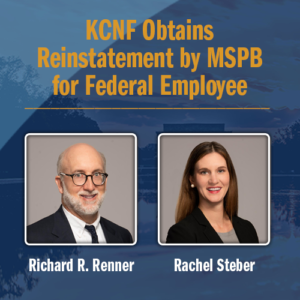 KCNF is pleased to announce that Richard Renner and Rachel Steber have obtained a significant victory, with an order reinstating a client to her position with the Fish and Wildlife Service. The client, D’Anna Laminack, was removed from her position as an Environmental Education Specialist and Volunteer Coordinator, supposedly for poor performance; Richard and Rachel represented Ms. Laminack on her appeal to the MSPB. When an agency tries to remove an employee based on performance, one of its requirements is to show that OPM approved its performance system. Such approval is so routine, the MSPB holds that OPM approval will be presumed unless the employee challenges the approval.

In this case, Richard and Rachel challenged at the MSPB hearing whether OPM approval had been granted. In response, the agency was only able to introduce a form describing the performance system, on which it had mistakenly checked too many boxes. Even though OPM approved that form, the MSPB Administrative Judge found that OPM did not approve the system actually used to remove Ms. Laminack, and she reversed the removal. While the agency has appealed that decision, Ms. Laminack is back on the payroll until the agency’s appeal has been decided, which may be more than a year. The outcome in this case is the result of alert litigation on the part of KCNF attorneys Richard Renner, Rachel Steber, and Sarah Martin.