Here are some sobering facts:

The gender pay gap is the result of many factors, including bias against working mothers, direct pay discrimination, racial bias, disability, access to education, and ageism. The end result is that different groups of women experience varying gaps in pay.

Everyone deserves to earn a fair wage for the work done they do. So why do we have a huge pay gap between men and women doing the same job? Worse yet, women’s wages vary widely by race and ethnicity, and for working mothers. 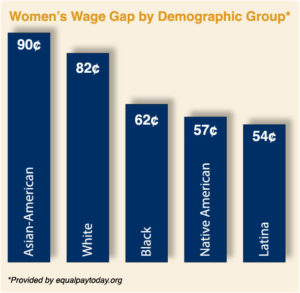 Statistics provided by equalpaytoday.org illustrate the dramatic pay gap experienced by women, both relative to men and to each other by demographic group. As this graph shows, as a group, Asian-American women earn closest to their male counterparts at 90 cents to the dollar earned by men. But, at the the other end of the spectrum, Latina women earn basically half (54 cents) as much as men doing the same jobs.

According to a 2019 Pew Research Center analysis, since 1980 the pay gender gap has narrowed, but it has remained relatively stagnant over the past 15 years or so.

As recently as last year, women, on average, earned only 85% of what men earned. Based on this estimate, it would take an extra 39 days of work for women to earn the same annual wages as men.

The bottom line is that closing the gender pay gap will take action from individuals, employers, and policymakers.

We work for change

The employment lawyers of Kalijarvi, Chuzi, Newman & Fitch strongly believe in the need to eradicate the long-standing wage gap that has a huge impact on the economic security of women and families. If you have problems or questions about being paid properly, please contact us. We advocate for you.