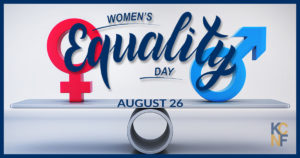 Today, we celebrate Women’s Equality Day as one hundred years ago, women finally gained the right to vote. Why the 26th? Although the 19th Amendment was fully ratified on August 18, 1920, then-U.S. Secretary of State Bainbridge Colby did not sign the proclamation formally adopting the Amendment into the U.S. Constitution until August 26, 1920.

Yet not all women gained the right to vote in 1920. Although Black women voted and held political office after the 19th Amendment was ratified, many states began passing laws limiting their freedoms, including their right to vote.  It was not until 1965 that Black women fully (re)gained this right with the passage of the Voting Rights Act, which prohibited racial discrimination in voting. This act, signed into law by President Lyndon Johnson, outlawed the discriminatory voting practices adopted in many southern states after the Civil War.

Women may have the right to vote, but we are still not equal in many respects. Women continue to face huge wage gaps; women in most states still do not have mandatory paid parental leave, which in many instances leads to discrimination in hiring practices; and although women are approximately 51 percent of the population, we hold less than 25 percent of elective offices.

According to the Center for American Women and Politics, women continue to hold only a fraction of key positions. Women constitute:

And yet unequal representation is only one of many serious problems women face around the world. According to Human Rights Watch: “Despite great strides made by the international women’s rights movement over many years, women and girls around the world are still married as children or trafficked into forced labor and sex slavery. They are refused access to education and political participation, and some are trapped in conflicts where rape is perpetrated as a weapon of war.”

What Can You Do?

Vote! Equality is much more than an issue of gender; it has real social and economic consequences. Women who came before us made significant sacrifices to earn the right to vote.  Let us not take their efforts for granted. And, as the women’s movement of the ‘60s and ‘70s so aptly put it: the personal is political.

The kind of country we want and deserve is up to each of us.  Let us celebrate how far we have come, yet never forget how much further we still have to go.

Woman Owned; Here for Everyone.

Since 1975, we have been a woman-owned law firm. It is our honor to protect the rights of all workers and to ensure equality for everyone.