It Takes Courage to Say “Me Too” in the Workplace: Recognizing Bravery 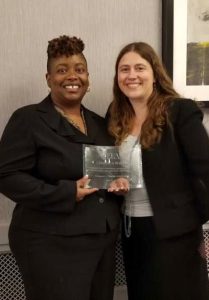 Standing up and saying “Me Too” to report sexual harassment or assault in the workplace takes courage. The EEOC recently noted that “[r]oughly three out of four individuals who experienced [workplace] harassment never even talked to a supervisor, manager, or union representative about the harassing conduct. Employees who experience harassment fail to report the harassing behavior or to file a complaint because they fear disbelief of their claim, inaction on their claim, blame, or social or professional retaliation.” These fears are not unfounded. Retaliation is illegal, but (as reported almost daily) it still happens. Reporting a workplace harasser or filing a complaint takes guts; but when an employee comes forward, s/he is standing up for everyone. Federal Correctional Center (FCC) Coleman, a federal penitentiary in Florida, is a perfect example.

Female Correctional Officers at FCC Coleman lived a workplace nightmare. Every day, inmates subjected them to sexual harassment including openly masturbating at them, shouting gendered and sexual obscenities at them, stalking them, grabbing their breasts, threatening to rape them, and even throwing semen at them. The women reported these egregious actions to management, but management told them to “suck it up” and that if they couldn’t handle it they shouldn’t work there. Even worse, some were told that it was just an example of why women shouldn’t work in a men’s prison. When some of the women had had enough, they sought legal advice. Even then, the first attorney they spoke with dismissed their complaints, telling them that “you can’t sue the United States Department of Justice.” Luckily, they persisted.

Ultimately, the Coleman women came to me through their union. I was appalled by the situation and lack of response. We pursued a class action against the Bureau of Prisons (“BOP”) and, in order to bring the claim, five courageous women agreed to be “class agents,” essentially the face of the lawsuit. Taronica White, Tammy Padgett, Lena Londono, Eva Ryals, and Carlissa Warren-Spurlock, selflessly stood up not only for the rest of the women involved in the lawsuit, but for every woman who would work at FCC Coleman in the future. Countless other women came forward to provide information and support the litigation. By the end of the case, so many women wanted to help that we couldn’t list them all as witnesses at trial. Without their courage, nothing would have changed.

Not surprisingly, BOP did not agree to make necessary changes until the women won a significant victory when the judge overwhelmingly agreed that the women were subjected to a hostile work environment. BOP then agreed to consider mediation.

The Coleman women pushed for extensive but necessary changes, seizing the opportunity to ensure a workplace free of harassment not just for themselves, but for all of the women who would come after them. In fact, by that time, only two of the five women still worked at Coleman. Several months later, the case settled for $20 million and an agreement that the Bureau of Prisons would implement extensive changes to stop the harassment. As it turns out, you can sue the Department of Justice. BOP agreed to changes that even the judge acknowledged she may not have had the authority to require. As testimony to their dedication, the National Employment Lawyers Association recognized these women and their bravery with a 2018 Courageous Plaintiffs Award. Speaking up about and standing up to sexual harassment and sexual assault in the workplace is never easy, but when those who can do, they do so for the benefit of everyone.