Your Right to Protest as a Federal Employee. 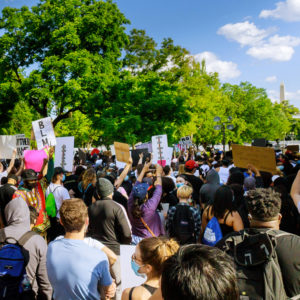 Over the past week, thousands of Americans have taken to the streets to protest police brutality and racial inequality. The First Amendment to our Constitution guarantees that everyone may peaceably assemble and “petition the government for a redress of grievances.” Federal employees have just as much right as other Americans to exercise that right to join in these protests and rallies, to donate to political and charitable causes, and to share opinions on their personal social media accounts. However, in order to insulate the civil service system from partisan politics, Congress has enacted the Hatch Act, which places some limits on the political speech of federal employees.

Can I join a protest in person?

Yes! As long as you are off-duty and not in a uniform or wearing insignia that makes it appear that you are participating in an official government capacity, you are allowed to participate in peaceful demonstrations. You should not drive a government owned vehicle to a protest. Also, employees with security clearances should be especially careful to follow instructions given by law enforcement officers while attending these protests. An arrest, even a baseless one where the charges are later dropped, would need to be reported to the cleared employee’s security office and could cause complications during a clearance investigation.

Can I donate money?

Yes! Federal employees are allowed to make charitable donations and political contributions outside of work hours. Use your personal contact information, and not your government email address or telephone number, when making these contributions.

Can I ask other people to donate money?

This is a tricky one. Federal employees may not solicit political contributions from others. However, many of the organizations actively involved and seeking support during these uncertain times, such as the NAACP’s Legal Defense Fund, the Community Justice Exchange (which runs the National Bail Fund Network), and the Minnesota Freedom Fund, are nonprofit organizations and not political groups. If you are raising money for a cause, make sure it is not associated with a partisan candidate or political party before asking others to donate. If you are unsure whether a particular organization is acceptable or not, check with your Ethics Officer and/or the Office of Special Counsel.

Can I post my opinions on current events to social media or write a letter to the editor?

Yes! In a 1968 case called Pickering v. Board of Education, a school board fired a teacher after he wrote a letter to the editor criticizing the school board’s allocation of funding. The Supreme Court held that a public employer cannot fire an employee for speaking on matters of public importance, absent proof that the employee knowingly or recklessly made false statements. The critical issue is “matter of public importance;” courts have repeatedly held that federal and other public employees are protected only if their speech is about such issues. (Expressing your view that black lives matter is likely protected by the First Amendment; informing your supervisor that he has personality defects is not.) The Office of Special Counsel provides similar guidance on federal employees’ speech rights on social media. Federal employees may “like,” “share,” “tweet,” or “retweet” their opinions on current events and partisan political activity as long as: they do not do so while in the workplace or on duty; they do not refer to their title or position in the government while doing so; and they are not soliciting political contributions. A supervisor also should be careful not to directly communicate with her subordinates about her support or opposition to a particular candidate or partisan group; a supervisor who is “friends” with or has subordinates as “followers” may make a general post about a partisan group or candidate, as long as she is not targeting her subordinates with the message.

If you are a federal employee who has experienced possible retaliation because of your expressions of support for a non-political organization or ideal, please contact the employment lawyers of Kalijarvi, Chuzi, Newman & Fitch. We advocate for you.