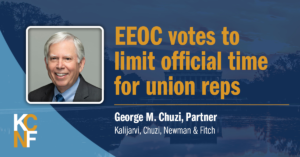 KCNF partner George Chuzi spoke with cyberFEDS® reporter Anjali Patel, Esq. to discuss the EEOC’s final rule, currently awaiting approval by the Office of Management and Budget, that would strip federal workers facing discrimination of their right to be represented by a union representative. The article, EEOC votes to limit official time for union reps explains that the proposed rule change would prevent union representatives from using EEO official time to assist federal employees in filing discrimination complaints.

According to Chuzi, current regulations allow employees who allege discrimination to be “accompanied, represented, and advised by a representative of [their] choice,” because “the EEOC complaint procedures are complex, and many employees who do not have a representative are at risk of losing their complaint simply because they are late with a filing or they fail to phrase their claim correctly.”

Chuzi notes that if the rule passes, employees who have been discriminated against will likely be forced “to hire an attorney, at a cost that many employees cannot endure, or ask their representative to take their own leave for their involvement in the process.”

Explaining the impact on federal employees, Chuzi adds, “the EEOC’s final rule is no more than a blatant effort to limit the influence of unions and inhibit complainants’ ability to obtain affordable representation,” as “there is no logical reason why a union representative is any less capable of representing a complainant or why the complainant should be precluded from choosing a union rep for his or her complaint.”

If the final rule is approved before Inauguration Day, it is likely that the Biden administration would go through the regulatory rulemaking process to rescind it.